Nothobranchius furzeri is a Teleost fish, members of the super-order Acanthopterygii, order Cyprinodontiformes. To the order Cyprinodontiformes, also belong the mumichog Fundulus heteroclitus of North America as well as the very popular aquarium fish guppy (Poecilia reticulata) and platyfish (Xiphophorus). To this order also belong the selfing hermaphrodite fish Rivulus marmoratus. All these species are used to in biomedical research or for studies of ecology and evolution and genomic resources are being developed at increasing pace for these species. Interestingly, Nothobranchius is closely related to the Japanese ricefish Medaka (Orizyas latipes), since the orders Cyprinodontiformes and Beloniformes are sister groups and closest neighbours in a phylognetic tree of Teleosts. To the super-order Acanthopterygii belong also the much studied "pufferfish" Takifugu rubipes and Tetraodon nigroviridis, stickleback (Gasterosteus aculeatus) and Cichlids, whose genomic resources experienced an explosive development in the last years. Hence, Nothobranchius furzeri phylogenetic position is very convenient for performing comparative genomics and molecular evolution studies. 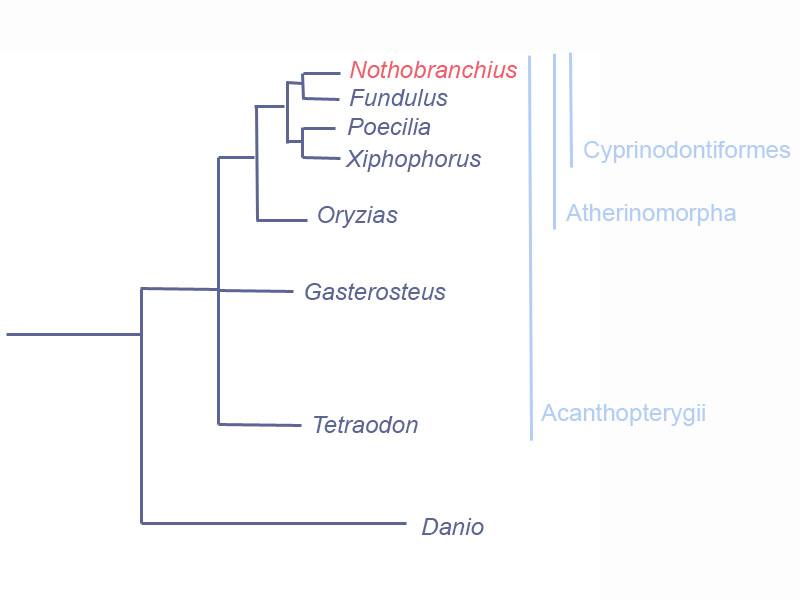 The genus Nothobranchius is formally defined by the presence of a fake gill opening in the operculum, hence the name. All Nothobranchius are annual fish with eggs which can enter a diapauses stage to survive dessication. The genus comprises about 50 valid species and a series of other taxa which need to be described formally. In the last years, a few new species of Nothobranchius were formally described each year. Particularly active in taxonomic studies on Nothobranchius are Ruud Wilderkamp, Brian Watters and Stefano Valdesalici. These animals have a marked sexual dimorphisms and dichromatism. Females are smaller than males and of dull color, males on the other hand are among the most colourful fresh-water fish. Females of related species can hardly be distinguished morphologically and the classification is based mainly on male livery and size. They are relatively small fishes with a median size of 5 cm (ranging from 3 to 15 cm). These fish are all adapted to survive in temporary waters and all produce eggs which not only resist desiccation but require a dry period to develop correctly, at least in captivity. They all express a stereotyped behavioural pattern in which the male drives the female toward the substrate in order to lay eggs in the muddy bottom (see also Life Cycle, Ecology, Diet).